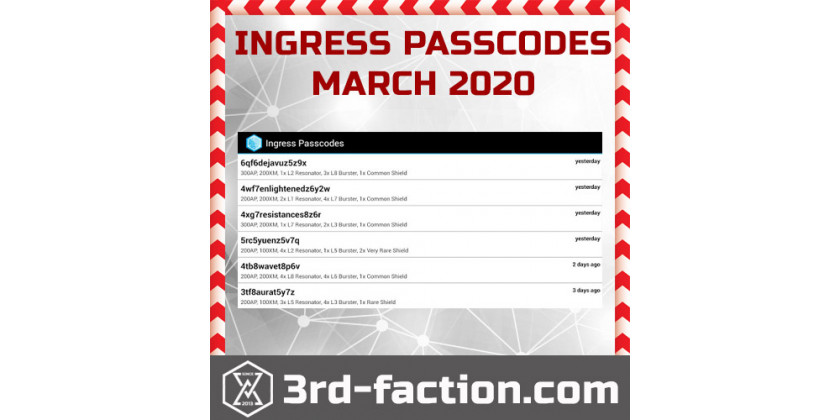 Ingress Passcodes 2020 - codes that can be redeemed to gain Inventory items and they often also give a small amount of XM. Items can vary in level; most current codes give items the same level as the agent (up to L8). MODS and other non-level items are usually between COMMON and RARE MODS. But some passcodes from our MARCH LIST give out VERY RARE items like the Lawsons, Jarvis, Ada, Quantum Capsule and so on.These codes can be found in the internet, they are thrown into regional chat rooms, spread by Ingress activists on their blogs and twitter accounts.

How to enter passcodes?

iOS - impossible to use passcodes from scanner, function is blocked by game devs. Use Intel Map in browser, in the upper right corner of the page, click Passcode.

Passcode already redeemed – You have already used this passcode before.
XM object capacity reached – You have more than 2000 items. Try to delete low level items and use passcode againe.
Passcode fully redeemed – No longer available. Some passcodes are deleted by game devs. Shit happens(
Passcode circuitry too hot – Wait for cool down to enter another passcode – You have been submitting codes too quickly.  It will take roughly 30 mins to be able to submit another code.