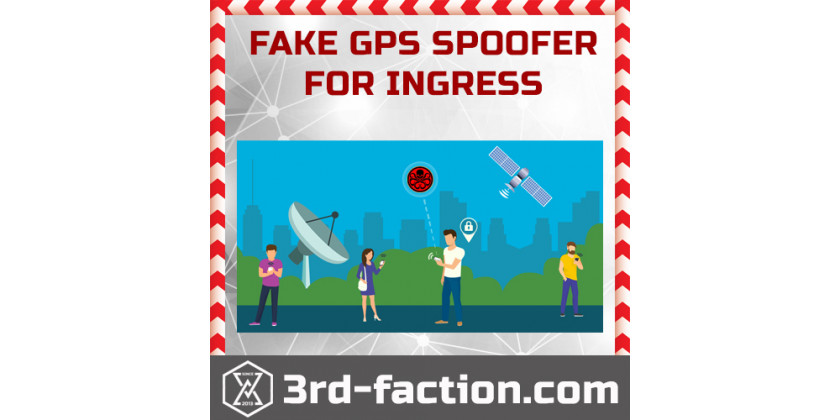 Inevitably, after the first steps in Ingress Prime universe a player starts to crave more. Gaining AP faster, hitting a certain level with less efforts, submitting more Portals and making faster progress of your Agent and help the Faction. It requires lots of time devoted to the game or... a bit of cheating. In this article we tell you everything you need to know about Ingress Prime GPS spoofing.

Tricking others for your own benefit? Same old song again. We learn how to do it since childhood, and no modern game is possible without some kind of cheating. For AR games (like Ingress, Pokemon Go, Wizards Unite) where your presence required for performing some action it's a spoofer app or fake gps program. The most known so far is official iSpoofer iPhone. Let's take a closer look and find out whether it is actually that good.

The iSpoofer app helps you to modify your GPS location and "transfer" you to any place on the planet. It sounds quite tempting to perform actions somewhere in Central Park in NYC instead of trying to achieve something sitting on a farm in Kansas. People who play Pokemon Go use spoofers safely and successfully. What can be easier? Change your location and hit a new level from your couch! So is spoofer safe for Ingress Prime as well?

The short answer is NO!!!

Our team has performed several tests to check the work of free Ingress spoof gps bots. The results were dreadful! Sooner or later, no matter what your level is, no matter if you used iSpoofer iPhone for the 1st time, no matter if you just tried it once or was successfully cheating for weeks, your account would be banned. Do you want to lose all the progress and start from the beginning? We don't think so!

What works for Pokemon Go might be dangerous for Ingress Prime. So next time you would be thinking is spoofer safe to use, remember about the ban. We advise to play legit and respect other players! If you want to hit a certain level so desperately ask members of your Faction to help or just buy any ingress items in our shop. We sell all items and services you may need for your gameplay and it is absolutely SAFE for your account. When cooperating with our team it's easier to gain AP and make progress.

Why agents use Ingress Fake GPS?

iSpoofer is an official app for modifying location, but it works only with your iPhone, iPad or PC. There's no iSpoofer Android version, so the players have to look for other options. Again, no Ingress farm bot is safe to use. Most reports and actions performed by a suspicious player are checked by humans, not machines. If you are caught, say goodbye to your account and all your achievements. Despite the possibility of being banned, users still try to install the app to succeed in the game. Why?

Why better not to use Fake GPS by your own?

These are the main reasons of fast breed of different kinds of Ingress farm bot, flooding the planet and preventing legit players from enjoying the game. The results of this are sad:

Niantic has strict rules about any kind of spoofing. The whole point of the game is to go out and to discover the territory around you. Sitting on a couch while attacking a Portal using iSpoofer iPhone is against ToS. Each account is immediately banned for cheating for a year or less. The company was fighting for legit gaming process and might have succeeded in their own battle with the opposing side.

Recently Reddit threads have exploded with information of iSpoofer iPhone being shut down. Users with annual subscription have got emails saying about cancellation of their subscriptions. The app itself is no longer available on App Store and the official website is "under maintenance". Might sound like dreadful news for cheaters! Are there any replacements for iSpoofer? Yes, but if you want your main account to be safe - better order any services in our shop or buy any items you need. We use only PRIVATE software which was created only for our team. It is fully safe and can not be detected by NIA. Also we are selling ingress items from real agents like you, that is why our items will never be detected and deleted by NIA!